Back in October, Team Diamonds (serving at Kings Heath Boys in the West Midlands), climbed Kinder Scout to raise money for charity as part of their social action project. Nicole from Team Diamonds wrote this wonderful blog on the whole experience…

Kings Heath Boys has a strong House system, each with their own two charities that they raise money for throughout the year. We decided to get the students involved with our fundraising, and therefore the House with the most positive points during the week before our climb would receive our raised money to donate to their charities. We announced this in each House assembly and sent the GoFundMe link around to teachers and our own friends and family members. 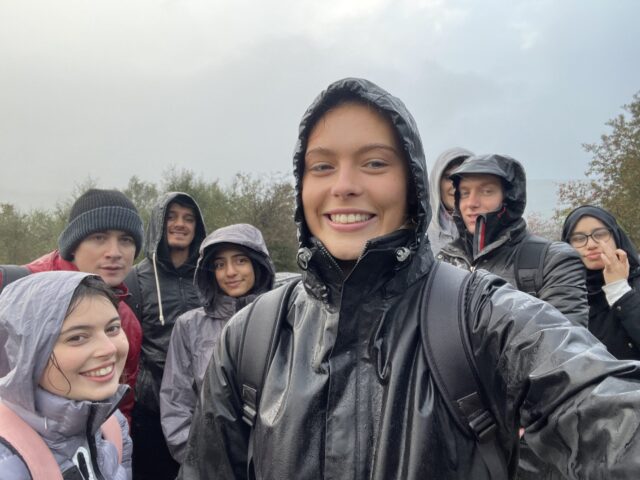 On the morning of the climb, the weather was awful. It was heavily raining, and we anticipated the conditions up the mountain wouldn’t be very good. Nevertheless, at 6am we all set off in two cars to the Peak District. After some questionable song choices and George repeatedly having to turn the volume down, both groups arrived at the Edale car park at the base of the mountain at around 8.30am. We geared up in waterproofs and walking boots, Seb controversially wearing a tracksuit and some leather trainers. We set off, with Ibrahim being the only member of the team that had walked Kinder Scout before – so we all reluctantly followed his lead.

Before reaching the bottom of Kinder Scout, we had to cross over a series of railway bridges and through a number of farms. It seemed as though we were going around in circles as each bridge looked suspiciously familiar. But by some miracle, we finally reached the first signpost signalling us to the mountain and we stopped doubting Ibrahim’s sense of direction.

The last leg to the top was Jacob’s Ladder: a series of stones and steps that was made much more difficult due to the wet weather. Walking together was a really good opportunity to work as a team, get to know each other more and build our relationships. It gave us something to work towards and look forward to during the week prior, it pushed us out our comfort zones and it was something completely different to our normal school week.

At the top, there was very limited visibility and so the views were rather underwhelming although there was incredible rock formations and the landscape was really impressive. We took some photos by the ‘infamous’ (as Ibrahim had named it) Kinder Scout rock to document our successful trip to the top. We spoke to a number of the other walkers in order to figure out our route back down. We followed a man who seemed to know where he was going, and he gave us two choices, a harder and more direct route, or a longer route.

We decided to challenge ourselves, which was slightly regretted by some when we saw the climb down. It was directly down a valley, following the waterfall to the base of the mountain. It required us physically lowering ourselves down from rocks, lots of careful footing and having a lot of faith in our new friend. It was extremely slippery and there were a number of occasions where we fell, tripped or misjudged our footing. After completing the climb, we were all very proud of ourselves and were glad we chose the more challenging descent; there was a great sense of achievement. 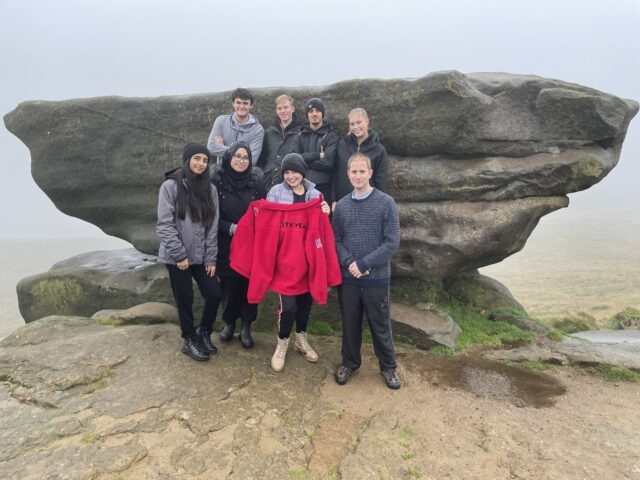 After reaching the bottom, there was a short walk through Edale village back to the car park. We changed out of our wet clothes and muddy boots and decided where we were going to have our celebratory dinner. Both cars drove back to Birmingham, endured more questionable DJing and reconvened to have our much-anticipated meal. It was a lovely end to the day!

The week after the school half term, it was announced that the Chamberlain House at Kings Heath Boys’ had been rewarded with the most positive points with a 300-point lead, meaning that Mind and Testicular Cancer (as part of Cancer Research), received our raised money. Mind provides advice and support for those experiencing a mental health problem and campaigns to raise awareness and understanding. Cancer Research aims to find new ways to prevent testicular cancer, how best to treat it, and how to provide the best care to people diagnosed with the disease. We raised a total of £400 and therefore each charity received a grand sum of £200. And finally, on November 19th, we presented Kings Heath Boys with the money on our Social Action Day.

Thank you Nicole for sharing such an amazing account of your fundraising, and well done to you and Team Diamonds for everything you achieved!

Black History Month is celebrated every October here in the UK. Our Volunteer Mentors and CYUK staff team have been...